How to Handle Angry, Volatile Clients in Your Practice 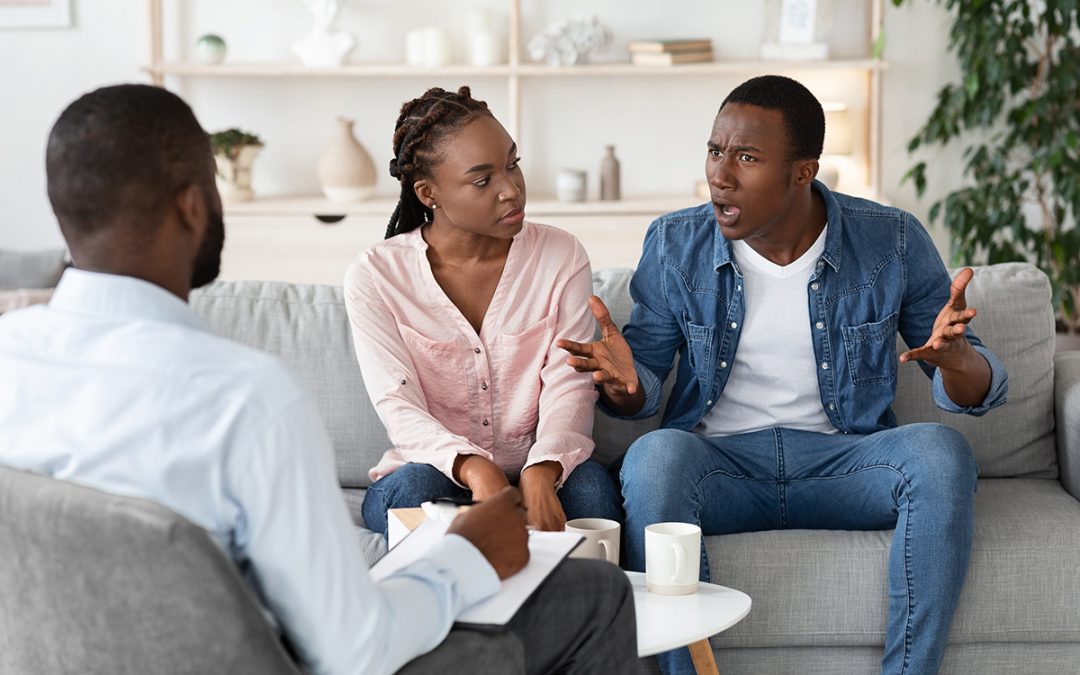 Almost every couple you work with has some degree of defensiveness or over-reactivity operating when they engage in a disagreement. This over-reactivity can range from mild, to moderate, to severe. In this article, we will focus on what you can do if you’re working with a highly reactive client who falls into the severe category.

William tended to shut down or leave the room during arguments with Paige. It was something he learned when he was growing up with an alcoholic, unpredictable father, and now he did it almost automatically. Even though Paige was half his size, William often didn’t feel safe around her. Paige could be verbally abusive, and her anger escalated quickly. And when Paige was angry, she yelled. And swore. A lot. In response, William acted like a scared church mouse. Couples like this are called conflict avoidance couples, as they tenaciously avoid dealing with their differences, instead either over- or under-reacting and shutting down. In this case, both parties were avoiding managing their anxiety over their issues, which can be challenging.

Paige had a history of developmental trauma, which started when she was three. Her father spanked her as punishment, and Paige felt extreme fear when she would try to run away from him. As she grew older, the punishment got more severe; frequently, she’d be left with bruises after being beaten with a belt. In defense, Paige learned to scream loudly in the hope of getting her father to stop due to his anxiety about the neighbors hearing her. Screaming became a survival mechanism. Later, in her marriage with William, Paige would reenact this scenario.

William had dark curly hair and a thick beard and often showed up to our session in ragged jeans and work boots. In many ways, he looked like Paige’s father. Sometimes in our sessions, Paige would see a certain look in William’s eyes that reminded her of her father, and she would get particularly loud. William would feel fear because of Paige’s verbal assault, and also because he could sense the fear she was burying. Eventually, William learned to sit with this anxiety when Paige would escalate during the counseling sessions.

But how do you work with such a person in relationship therapy? The first guideline is to not take a case like this unless you have strong boundary-setting skills. You will surely need them. Your next step will be to ask a series of interrelated questions. The answers to these questions will guide treatment.

In some cases, you will find your client is not particularly motivated, which makes medication more likely to be needed. Paige’s mother had bipolar II (and was herself prone to angry outbursts), and since bipolar is highly genetic, Paige decided to see a psychiatrist. Fortunately, Paige agreed I could speak with her psychiatrist, which facilitated a quicker diagnosis with the right medication. The mood stabilizer made a big difference for Paige, making it less likely for her to reach such heights of anger. Medication is one tool available to clients who struggle with anger and emotional dysregulation issues, but there are many to choose from.

Another strategy is practicing positive coping tools, including:

I taught Paige and William progressive relaxation and visualization in therapy, along with three yoga postures and meditation. This method gave Paige experience with several techniques, and she ultimately decided to sign up for a yoga class in her neighborhood. Paige liked the structure of the group and knew she would continue since she had paid for the class. She was also attracted to the fact that yoga is considered the fountain of youth and tones the body. Another benefit was that she made a couple of new friends, which contributed to the richness of her life. Finally, William and Paige made an adult agreement that if Paige got too loud during our sessions, William would give her a signal. If she did not calm down, one of them would take a time out. Paige also found cognitive behavioral therapy and mental health rhymes useful when she needed to talk herself out of escalation.

As relationship counseling continued, Page adjusted to the medication and she learned to quiet her emotions down by telling herself, “I do not have to get so worked up. We are just having a conversation. I have a choice,” and other reality-based statements. Gone were the days when she said to herself, “I just have a hot temper and William needs to learn to live with it. If he weren’t such a wimp, he would stand up to me.”

Slowly, Paige began to connect with the fear and terror that was under her anger and developed the emotional muscle to manage her anxiety while having difficult discussions with William. She would often have to do yoga or go swimming before a difficult conversation, but she ultimately found that when she and William could first learn to understand each other, from there they could work out a mutually satisfying compromise.