From Horror Flicks to Taking Risks 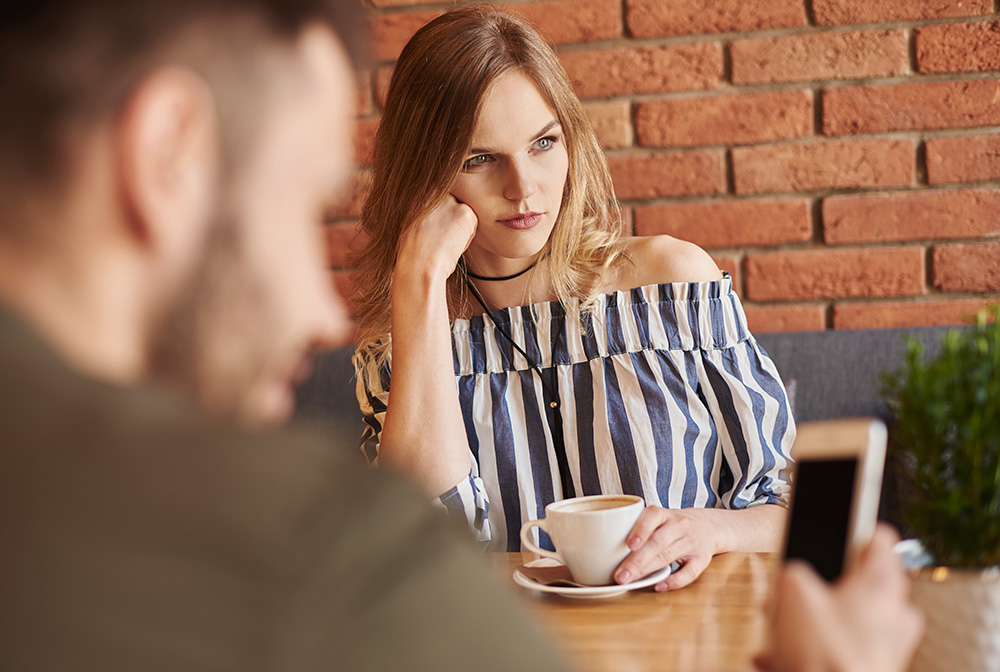 The young woman slammed the phone down. The call was coming from inside the house! “Could you please turn the TV off, get up off your butt and put the dishes away?” Trisha was mad again. Philip just rolled his eyes and ignored her. Trisha was always yelling at him, and if he got upset, it only made her yell more.

How Our Past Relationships Influence Our Adult Ones

A particularly common problem I see in couples therapy is when one person is passive and rarely initiates discussions or activates themself. Philip was a man who grew up with a cold, distant father, who often hurt Phillip with his harsh comments and rigid standards. “Why can’t you get As like your sister? You’re just lazy!” his father complained. As a child, Phillip learned to hold his feelings back out of fear of being criticized for expressing himself. Phillip recalls hurting himself on his skateboard when he was twelve and breaking down in tears. His father yelled at him. “Men don’t cry! Quit acting like a girl.” By the time he was a college student, Philip had suppressed most of his feelings. Later, as a young man, he found Trisha. Trisha was nurturing, but somewhat depressed and prone to temper outbursts. Trisha’s father was passive, so like many people, she picked someone who would maintain aspects of the “old familiar environment.” This is the tendency to partner with someone who reminds us of someone from our childhood, so we can work out our unresolved issues in our adult relationships. Later in their marriage, Trisha felt like she was living with her dad, and Phillip felt as alone and unhappy as he had in his childhood home.

The Process of Drifting Apart in Your Primary Relationship

Initially, the marriage was good. The two enjoyed cooking together, taking hikes in the beautiful Minnesota parks, and cuddling together. Phillip was a horror movie addict, and while Trisha loved cozy mysteries, she enjoyed watching 80s slasher flicks with her husband. However, after a year or two, Trisha began to feel more alone and bored due to Phillip’s lack of self-expression and assertiveness. She was tired of sitting in restaurants, staring into space, while Philip ate in silence. He seemed so self-absorbed. “Why don’t you say something?” she would yell, and of course this shut Philip down even more. Trisha didn’t understand why Phillip wouldn’t talk to her and slowly began to feel like he didn’t love her. Philip had learned to shut down as a kid and didn’t recognize he was not being generous with Trisha.

With time, they became what some might call a disengaged couple system. Phillip was largely wrapped up in his work and spent weekends watching his favorite horror movies. Trisha built up a wall of resentment and focused her energies on her job and love for mystery novels. They stopped making love, and in many ways were set up for an affair. The fact that Trisha had trouble understanding what she was feeling made it hard for her to communicate her needs and wants, especially when she assumed Phillip didn’t love her anymore. She began to retaliate, figuring, “I’ll show him. If he won’t talk with me, I won’t talk either.” One weekend Trisha didn’t speak to Philip for 48 hours. While this gave her a mild sense of power, she imagined that it would ignite Phillip to change. That was far from the truth. Philip actually enjoyed his “time out from Trisha” weekend as he could hide away and watch movies in peace. For Philip all the drama and emotion he needed could come from the TV screen, watching as the main character run through the woods, pursued by a crazed cannibal slasher. For Philip to change he would need to find the motivation inside himself.

The Courage to Speak Your Truth

After several years of feeling alone, Trisha received a call from an old high-school flame. His name was Jeff, and he’d been the quarterback for the high school football team. They began meeting for lunch and coffee, and slowly the two began to have feelings for each other. Trisha entertained the idea of meeting Jeff at the St. Paul Whispering Pines Motel, but after some reflection she turned down his offer. Fortunately, Trisha decided to muster up the courage to tell Philip about her relationship with Jeff. It was hard, but she told Phillip she didn’t know if she wanted to stop seeing Jeff. Phillip was scared and suggested they go to couples therapy, which finally Trisha agreed to.

If you have problems communicating your thoughts and feelings toward your partner or spouse or often do not know what you are feeling, this next section is for you.

Know Your Core Feelings to Foster a Healthy Relationship with Self

One of the first tools in couples therapy is to make sure each partner is aware of and can identify the core feelings. It is hard to have a meaningful conversation without core connections. The core feelings are 1) sad, 2) mad, 3) scared, 4) excited, and 5) love. Of course, there are many, many other feelings, but even babies experience the core feelings. Whether you are in relationship counseling or not, there are three things you can do to develop more connections to your core.

Unaware of feelings: We had a fight and I felt confused and am not even sure how I feel

Aware of feelings: Philip and I had a fight and I felt angry and hurt by how he talked to me.

One way to connect to your core feelings is to spend some time, maybe while sitting at a stoplight, asking yourself, “What is bothering me now? What might I be feeling? Sad, Mad, Scared, Excited, or Love?” Maybe do this when you are in the bathroom or when you are on a lunch break. Nothing but nothing takes the place of spending some time connecting with your body sensations and determining what you feel. This is especially important if you are one of those people who “thinks their feelings” rather than feels them. It can also help if you find a place to put a visual reminder of the five core feelings to remind you to tune in. Being able to identify with your core feelings often requires you to tolerate being uncomfortable long enough to get clear about what you are feeling. Often a person may bury certain feelings and largely feel one as Philip often felt scared and excited watching his movies. Trisha, on the other hand, seldom felt excited but was prone to angry outbursts.

Learning to be Assertive in Your Relationships

Phillip needed to realize from the couples therapy how much his passive nature was hurting Trisha. This discovery involved exposing what Trisha really felt about his type of absence from the marriage, which took several sessions. After Philip had a deeper understanding of what it was like for Trisha, we decided he would practice initiating twice a day, in small ways. We call it AssertX2. Philip started suggesting they go for a walk, go out for coffee, or watch a movie. He also practiced bringing up something that was going on in the world to spark conversation. While these are small steps, they made a difference and added up over time. As the two of them began to mend the relationship, Trisha finally ended her relationship with Jeff, cutting off all communication with him.

If you are struggling with passivity, you first want to learn to identify your core feelings. Phillip practiced checking in with himself a couple times a day to determine if he felt:

Phillip had a lot of trouble connecting to what he was feeling, but he spent 10-15 minutes each day writing in his feeling journal. He wrote whenever he felt uncomfortable inside, and gradually he began to identify that he felt hurt when he thought of Trisha being with Jeff. While it took a lot of effort, he talked himself into telling Trisha, “I notice I’m hurt when I think of you being with Jeff.” Trisha could see how difficult it was for Phillip to express himself. For months, Phillip had felt he was the victim as Trisha had had an emotiional affair. And indeed, Trisha was responsible for spending time with Jeff. It was a big step in marriage counseling for him to realize he was an active participant in pushing her away, measuring only a two or three on the assertiveness scale. Phillip remembered his mother telling him he was an active baby, and kids are not born passive. With time Philip, realized that his assertiveness was his birthright, and he became more motivated to put in the effort.

The Importance of Encouragement in Your Relationships

Trisha also had to do her part in encouraging Phillip to be assertive. She knew in the past she would not have accepted his offer of a couple of movies to enjoy, and would have said, “How about if we watch Murder She Wrote?” when Phillip wanted to watch The Exorcist. With the help of relationship therapy, Trisha learned to watch some of the movies Phillip suggested and to be aware of when he was making small steps at assertiveness. When she watched the new Halloween movie with Philip, she actually enjoyed it. Trisha grew up in a family where giving compliments was not part of conversation, but with time, she realized giving perks is a healthy habit. Trisha also spent time with her feelings journal so she could get a deeper connection to herself. It was hard for her to tell Phillip she felt closer to him as the two worked in relationship counseling, but she swallowed her pride and made the effort. It was wonderful to watch the two taking small risks and transforming their relationship dynamics.

Philip had had a hard time connecting with his anger and excitement, as he had buried them at such a young age. But he learned to tolerate his feelings so he could connect at a deeper level. I regularly ask partners what they are feeling in couples counseling sessions, and over time Philip was able to identify when he felt annoyed. He particularity got annoyed when Trisha made faulty assumptions about him, such as that he did not love her. One week when he identified his annoyance, I asked him to share with Trisha what he was annoyed about. At first, he was reluctant as he assumed Trisha would yell at him when he was feeling vulnerable. But with some further instruction, Philip decided to take the risk, and later he felt proud of himself. He said to Trisha in a cautious tone, “You make assumptions about me that are not true, and I wish you would stop.” Here Philip is starting to practice being assertive. Trisha shared she liked seeing that side of him. Again, her appreciation went a long way toward encouraging Phillip. After a couple of months of being assertive in the relationship counseling Phillip decided to take a local class on assertiveness training, which was a game changer for him. I loved it when he came to a session one day and announced, “I want us to take a dance class together, and I want to learn to be a strong lead.” A few years later, they invited me to a performance they were doing of the Argentine Tango, and I decided to take up dancing myself. Remember: Life is a dance, if you take it one step at a time.